The magnificent building of Vidhana Soudha stands as a primary attraction in Bangalore that every traveler to the city loves to explore. This building is the administrative center of Karnataka; you may not get access to enter this building. However, you can admire this beautiful structure from outside and take home some good collection of photographs.
This iconic building dates back to 13th July 1951 when Chief Minister K.C. Reddy and the then Prime Minister of India, Pandit Jawaharlal Nehru laid the foundation stone.
However, Kengal Hanumanthaiah was the man behind the conception and construction of Vidhana Soudha. He took great interest in its design. He wanted not only an Indian building but one characteristic of the region.
B.R. Manickam worked as a chief architect in the construction of Vidhana Soudha. He was a Civil Engineer and a Town Planner. Hanumanthaiah Rao Naidu, a graduate from London’s Architectural Association, assisted Mr. Manickam. It took several thousand workers and Rs.1.5 crore to complete the construction of Vidhana Soudha in 1956.

A concise history of modern architecture in India

Here is some text about the construction of Vidhana Soudha from the book A concise history of modern architecture in India – The massing, proportional systems, general layout, the grand central steps leading to a Portico, and the dome above are European Classical. The detailing of this massive building is neo-Dravidian.
The central dome rises to 55 meters above the ground level. There are subsidiary domes constructed of structural granite except for the central dome reinforced with concrete columns. The decorative elements like balcony, column capitals, and brackets resemble the temple architecture.
Masons capable of working the stone in a traditional Dravidian manner came from as far as Karaikal and Tiruchirappalli.

Well, this people’s palace, a temple dedicated to the nation, is poetry in stone!

There is a slogan inscribed on the facade of the building - Government Work is God Work. In 1957, the then Mysore Government planned to replace it with Satyameva Jayate, which did not happen.
In 1996, the inscription inspired a visiting U.S. state governor, George Voinovich of Ohio, to propose etching “With God, all things are possible” onto the Ohio Statehouse.
The cost of construction of Vidhana Soudha was somewhere between 1.5. to 1.7 crores. Today, the annual maintenance cost of this building is more than two crore rupees.
If you have not seen this mesmerizing building yet, then you should be there. The best timings are early morning or after 5 pm. However, you will see people taking selfies at any point of the time during the day.

There is more to explore from Vidhana Soudha, turn around to see a century-old heritage building that functions as a High Court now. You cannot get inside the building casually. However, you are more likely to enter the Cubbon Park, a great place to explore.
There are so many things to do in Bangalore, click on the label to read all. You may also wish to read my previous post about the HAL Tejas at Minsk Square or read all posts from Bengaluru.
Bangalore Places to visit in Bangalore Things to do in Bangalore Vidhana Soudha
Location: Ambedkar Bheedhi, Sampangi Rama Nagara, Bengaluru, Karnataka 560001, India 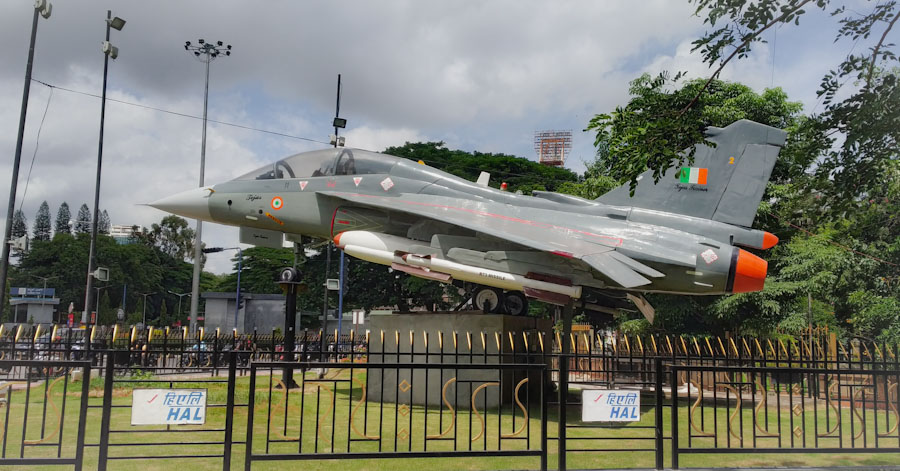 Where is Minsk Square?Minsk Square is located right in the city center, in front of Cubbon Park Gate No# 2. You may wish to click on the embedded map at the end of this post to navigate using Google Maps on your phone.
The Tejas Fighter PlaneThe Tejas Aircraft is “made in India” single-engine fourth-generation fighter jet developed by Aeronautical Development Agency and Hindustan Aeronautics Limited (HAL) for Indian Air Force and Indian Navy. It is the smallest, lightweight, multi-role single-engine tactical fighter.
The then Prime Minister of India Atal Bihari Vajpayee gave the name “Tejas” to this light combat aircraft. Yes, it is the lightest combat aircraft in the world with a very good weapon delivery.
The Tejas fighter jet has the capability of br… 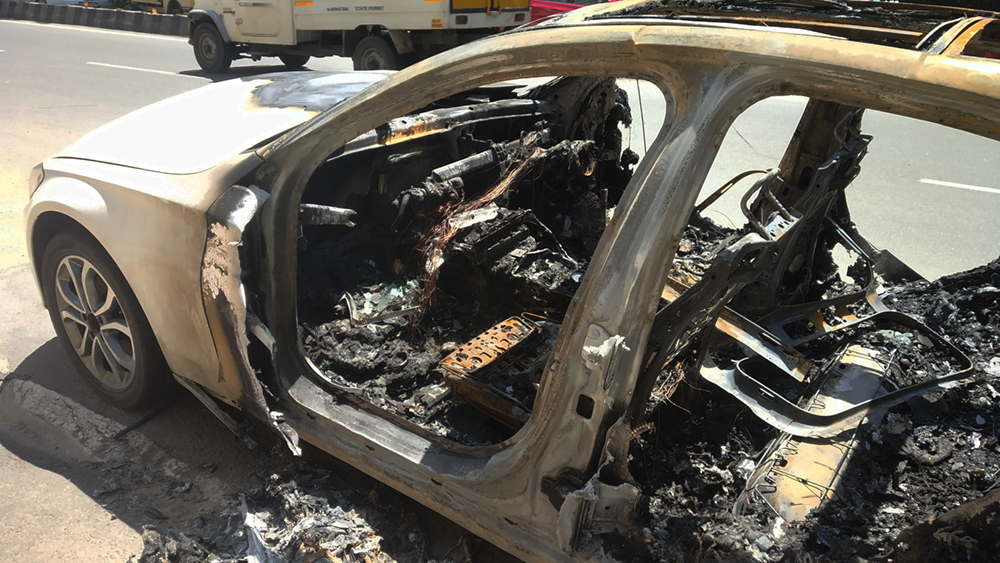 Mercedez Benz C200 Car Wreck Bangalore (Gallery)Yes, this is Mercedez Benz C200 car wreck captured in Bengaluru, Karnataka. When I checked with few people in the surroundings, they said it was accidental fire. One person said there was a quarrel that led to the Mercedez Benz wreck.


The Mercedes Benz C200 price starts from Rs. 41 Lakh (ex-showroom price) and the automatic petrol costs Rs. 47 Lakhs.
This is a 2015 model with fitness registration up to Aug-2030 with “running insurance” (last date 14th July 2020).
This car wreck location: Kasturba Road, Bangalore (near Sundaram Motors, in front of UB City gate).
These images were captured with Redmi Note 5 Pro smartphone. 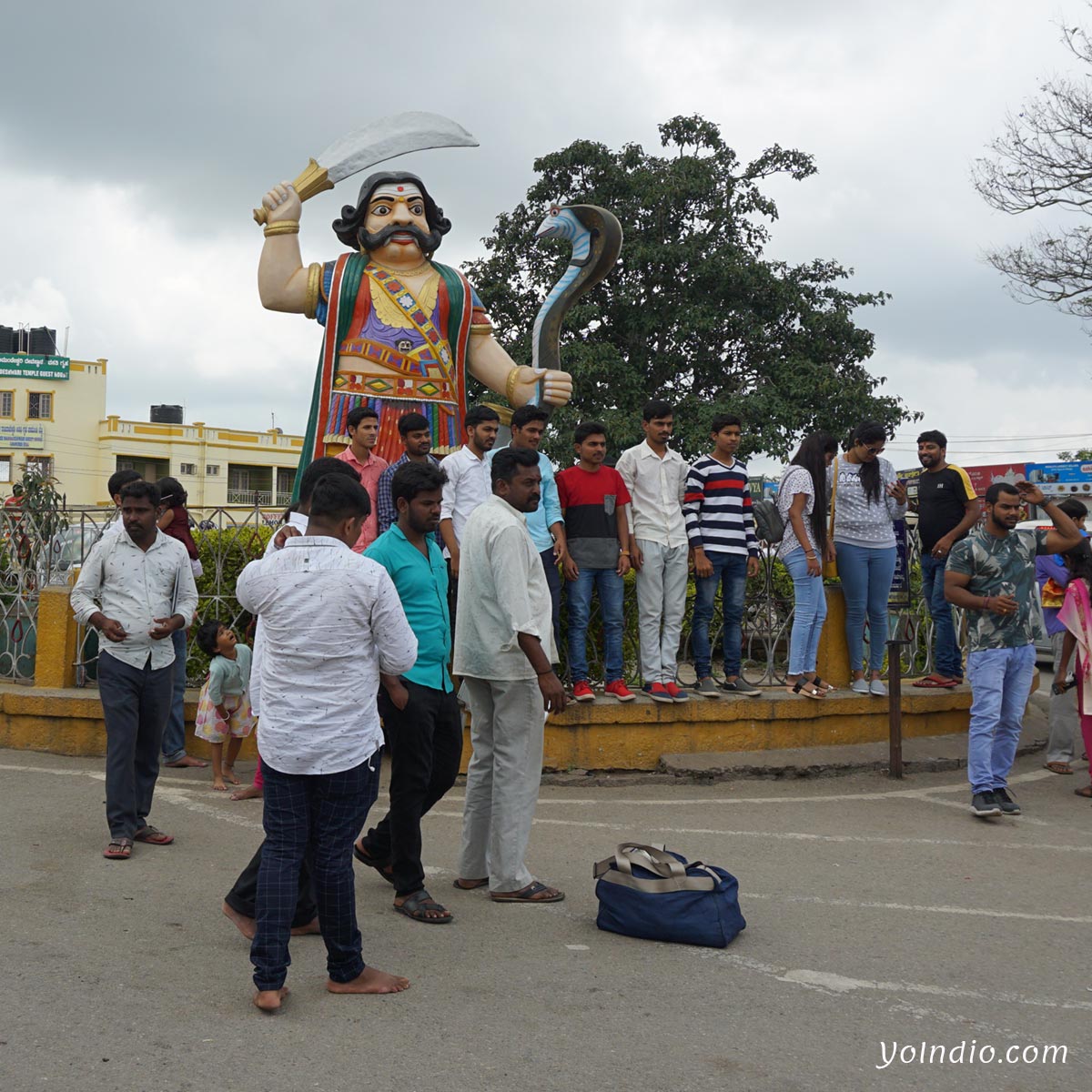 Selfie with Mahishasura Statue
When you reach the summit of Chamundi hills, the first thing you will come across is the beautiful statue of Mahishasura. As you arrive here, you are likely to take the first selfie with the Mahisasura statue.
Mahishasura Statue
Devotees from faraway places come to this sacred hill of Mysore to worship the Goddess Chamundeshwari at the temple dedicated to her atop the hill. The Chamundeshwari hill is about 13 km from the city center.
Chamundeshwari Temple
Priese selling sacred items

The Chamundi Hills or Chamundi Betta (betta "ಬೆಟ್ಟ" means hill in the Kannada language) is not only a religious place but also a place of tourist interest. People of all faith from across the world travel here to admire the beauty of the hill station.
The Mahishasura statue at the Chamundi hills is a primary attraction and as you can see in the photo, every single traveller will love to take a selfie with it.
The summit of the hill is the best place to be during the da… 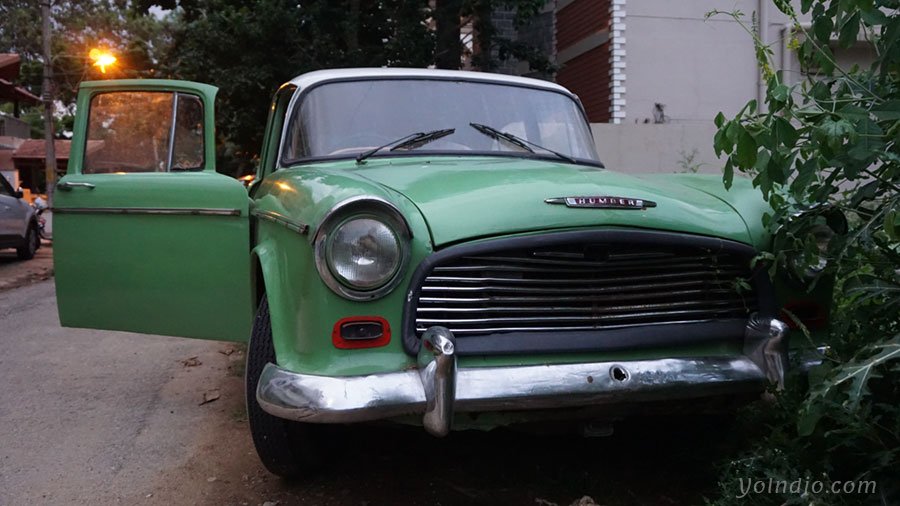 I photographed this Humber Hawk in Mysore city.  Thanks to my brother for showing this to me at our cousin's place who is restoring it. I have not done much research about this car in India but I am sure the Humber population is not much here. Before I could put in more of my thoughts, let me give the specification of this Humber Hawk car sourced from the internet. Humber Hawk Series I, 4 Door SaloonEngine Type: Spark Ignition 4 Stroke EngineFuel Type: PetrolFuel System: CarburettorValves per Cylinder: 2 ValvesDisplacement: 2267 cm3Horsepower: 54 KW/73PS/72HP (DIN)Gearbox: ManualNumber of Gears: 5 Top Speed: 140kmph or 86mphThis configuration should… 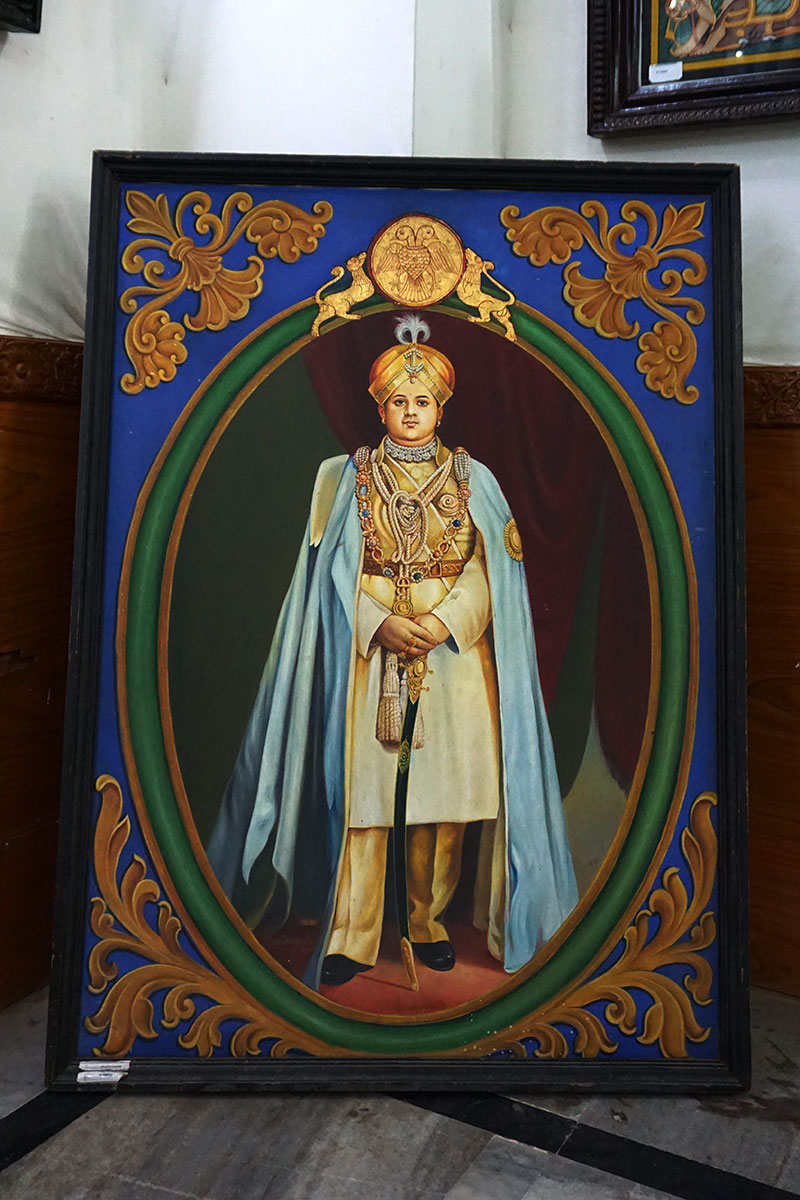 Vishnu Kala Arts Mysore (Mysore Paintings)Mr. Vittal Rao of Vishnu Kala Arts from Mysore invited me to witness his grand collection of Mysore Style of Paintings. He had organized the painting exhibition and sale in Kalamandir, a few months ago.
Maharaja of MysoreRukhmini KalyanaKurukshetra War Paintings
Statues made of brass


The collection consisted of both new and old paintings, some of them more than 100 years old. There were some brass statues as well. Every item exhibited was a valuable souvenir. Shopping in Mysore is complete when you take home a souvenir.
I am working on a project titled “places to visit in Mysore”, it’s going to be filled with loads of photos with brief information. Follow the link and let’s explore together.
What else you can do in Mysore?Well, you can visit Mysore Palace, Zoo, Chamundi Hills and if you are foodie, try the Hotel Hanumanthu Mutton Pulav. Are you a vegan? Then you should try Mylari Masala Dosa. There is lot to shop as well, follow “Shopping in My… 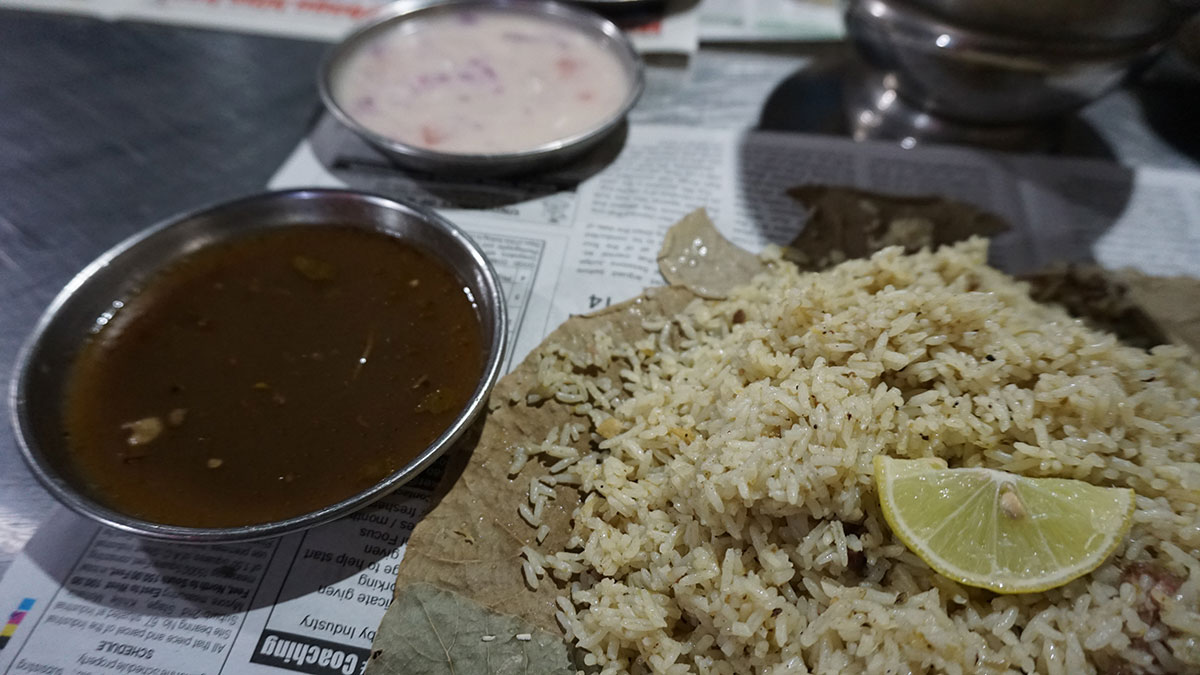 The restaurant has put a name board “Hotel Hanumanthu” but they are not a hotel. They serve just food!
Like any other popular restaurant, there was one Hanumanthu restaurant in the beginning. Now there are several of them within in the city.
Most of the time people ask for “Hanumanthu Biryani” which is not correct. What they serve is Pulav or Pulao, however you spell it, the pronunciation remains same.… 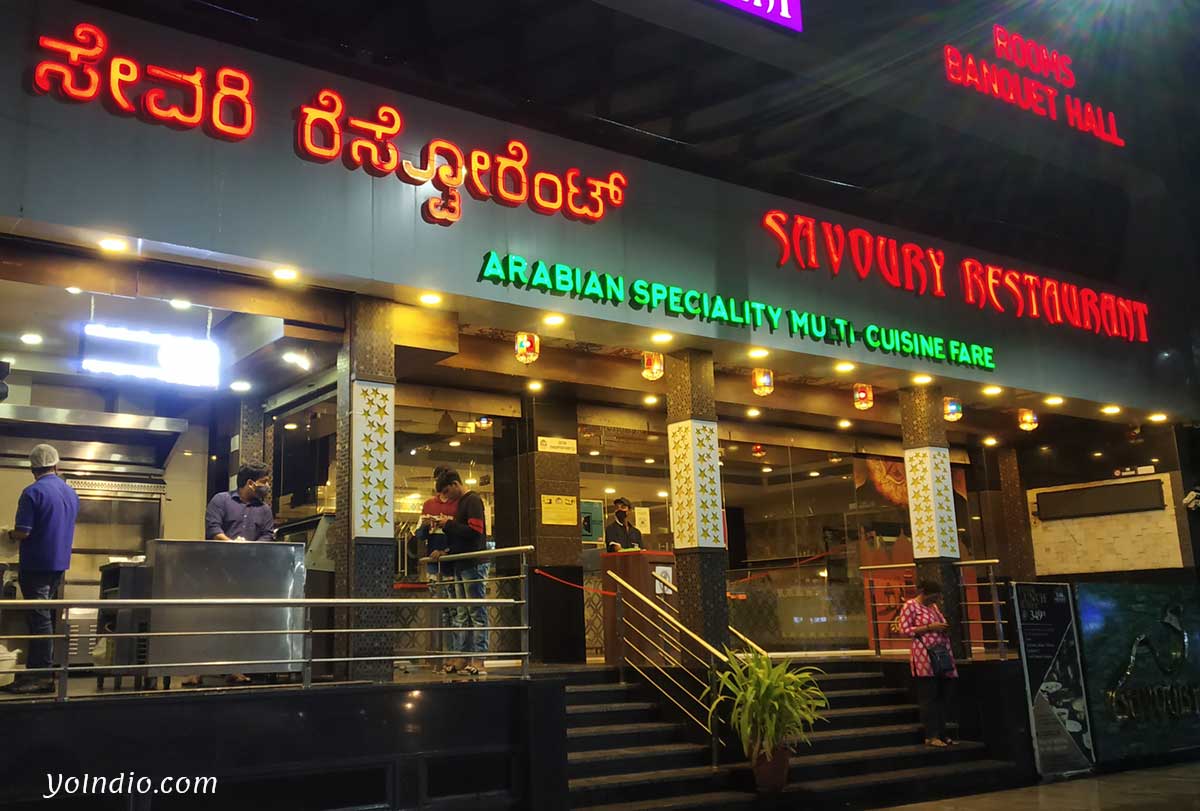 Alfaham Chicken at Savoury Restaurant Kammanahalli It isn’t difficult to spot the Savoury restaurant on the Kammanahalli main road (Bangalore east), a landmark in itself. It’s a big property with high-class interiors perfectly suitable for family dining. When you dine here, choose between Arabian, Indian and Chinese cuisine.
Alfaham BBQ Chicken My order for the day was the Alfaham BBQ Chicken and the Jumbo Shawarma Roll and I chose to parcel it to home instead of dining-in. It is less safe dining out during the Covid-19 pandemic.
There are several restaurants in Kammanahalli where you can reach out for mouth-watering dishes. The Savoury is certainly the best among them, they serve quality food at an affordable price.
Their menu list runs several pages and I will have to visit the restaurant many times to try it all. There is a lot to try in the vegetarian segment as well.
My favorites in this restaurant are the Alfaham Chicken BBQ (INR 470 full), BBQ Chicken (INR 440 full), Chicken Shawa… 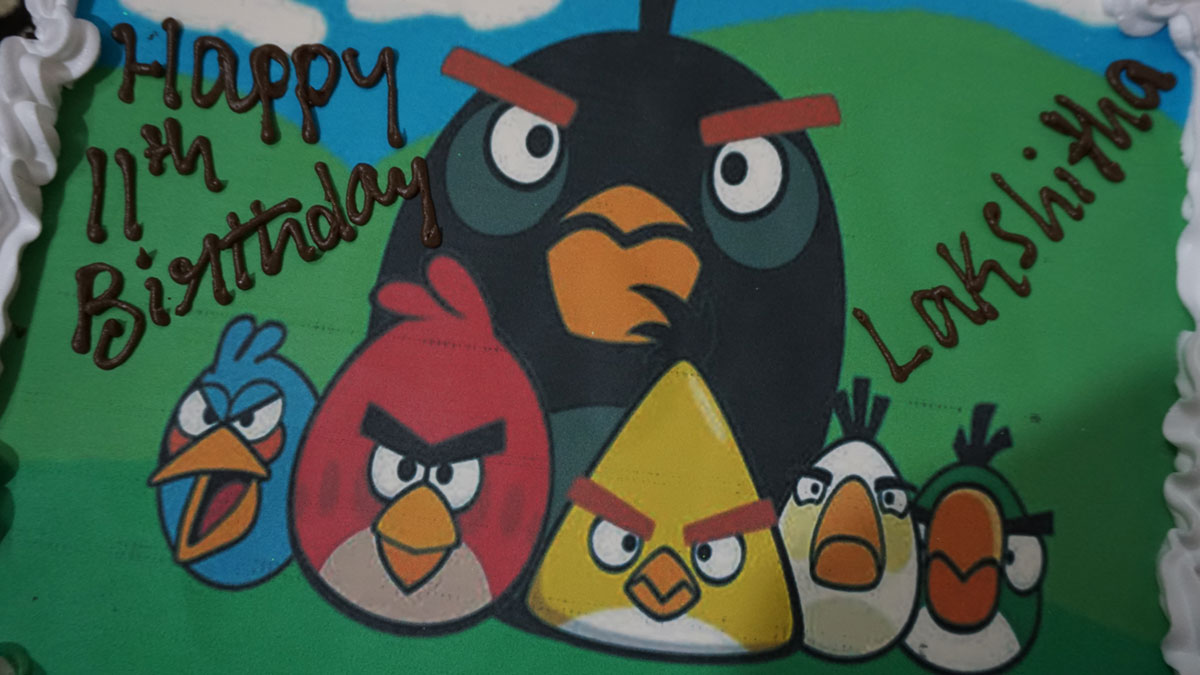 
Quick Review I am not sure if Amma’s Pastry gave free door delivery before the COVID-19 pandemic. They now give door delivery so there is no need for us to go there and stand in line. I liked their service and full marks for this.
Full marks to Angry Birds Birthday cake too, there was no flaw in the print. The pastry was awesome but the diabetic should consume too little of this.
The “11” candle you see in the photograph costs Rs. 40 (Rs. 20 each) and the small candles… 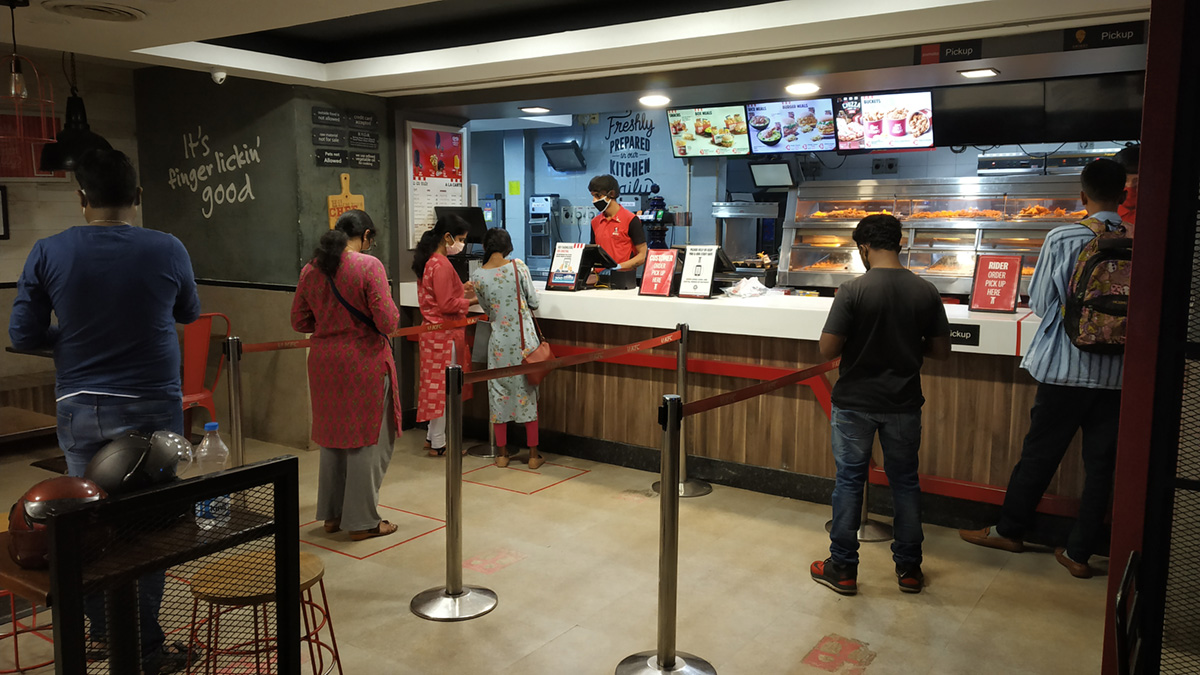